“Someone struggled for your right to vote. Use it.” Susan B. Anthony

Learn more about the League of Women Voters

Read about us to learn more

The League of Women Voters of the United States encourages informed and active participation in government, works to increase understanding of major public policy issues, and influences public policy through education and advocacy.

The League is proud to be nonpartisan, neither supporting nor opposing candidates or political parties at any level of government, but always working on vital issues of concern to members and the public.

The League of Women Voters of Utica-Rome Metro Area serves the people of Utica, Rome, Herkimer and the surrounding areas of Upstate NY. 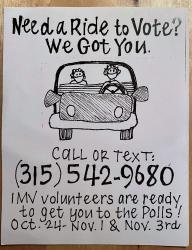 League has advocated for the expansion of absentee voting options for the November election.  Our efforts were successful and now all New Yorkers have three ways to vote in the general election.

Military and overseas ballots can be tracked ballot at https://nysballot.elections.ny.gov/TrackMyBallot/Search

VOTE411.org
Find the races and candidates on your specific ballot at www.vote411.org
VOTE411 is also available in Spanish

#PROTECT2020 is a national call to action initiated by CISA, the lead federal agency responsible for national election security, to enhance the integrity and resilience of the Nation’s election infrastructure, and ensure the confidentiality,

Leaderosity.org, has made the DEI training course available to ALL LEAGUE MEMBERS at no charge until August 11th! Thus, we invite you to get a head start on your own knowledge base as you lead your league to function through the application of a DEI lens. Sign up at this direct link to participate and spread the word to interested members in your chapter: https://www.courses.leaderosity.org/courses/the-equity-journey.

LWV is an organization fully committed to diversity, equity, and inclusion in principle and in practice. There shall be no barriers to full participation in this organization on any basis.